How to setup Eclipse IDE

First of all you need to install and configure different components of the Openbravo ERP environment as it's described in Custom Installation guide. In order to comply to development requirements some of those components have to be additionally adjusted according to Development Stack Setup.

After completing all of the steps in the aforementioned guides, please make sure that:

The source code can be checked out using any Mercurial client. There is no any restrictions on the read access so you wouldn't need any credentials to access the repository. The detailed procedure of the source code check out is described in Mercurial Manual for Openbravo Developers. As it's explained in the guide it's normally considered as a good practice to have a pristine clone and working one, so we would strongly encourage you to follow that 'rule'. It is also highly advisable to clone the repository into a destination directory which is outside of Eclipse workspace.

If you want to build the latest stable release:

The Openbravo ERP installation is performed in several steps.

So, first of all you have to configure the Openbravo ERP by specifying some general properties, e.g. Tomcat installation directory, database connection details, etc. This can (and in fact must) be done via a console application which has to be compile first. For that, go to the directory with the working clone of the repository and execute: <source lang="bash">ant setup</source> The invocation of this ant target will compile and execute automatically a console application.By going through the console application provide all requested information and at the end, select Accept to apply the changes and close the application.

Note: More about setup ant task can be found at Openbravo.properties#Edition.

As a result of these actions a new file Openbravo.properties, containing specified settings, will be created in config subdirectory.

More about the properties can be found at Openbravo.properties. Now the Openbravo ERP is ready to be installed.

In order to install the Openbravo ERP three main procedures have to be accomplished:

All this is done by invoking from the root of the working clone (XXX\opensource\openbravo\erp\devel\main\).

This process can take quite long time (up to 25 min) depending on hardware configuration. It's always a good idea to redirect the output of the task execution to a log file which then can be analyzed or sent to the support team in case of problems. After the task has completed the log should not contain any error or exception massages as well as it should have BUILD SUCCESSFUL message at the end of the file. (if you are under Linux use grep command to check whether the file contains any exceptions). After successful installation the next step can be taken - importing to Eclipse IDE.

If you find problems running install.source, check the Installation/Troubleshooting article

Now 4 projects need to be imported in the workspace (by menu File=>Import and then General=>Existing Projects into Workspace). Here they are:

Then open Servers view and create a new instance of Tomcat server: 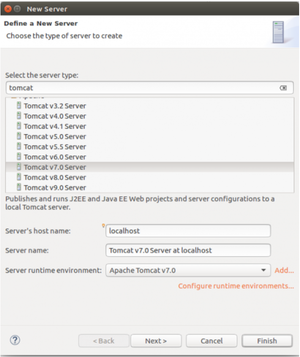 While going through the wizard select openbravo and add it to configured resources. Then click "Finish". The created instance should appear in the view. Double click on it to change its settings in the form depicted on the picture below: 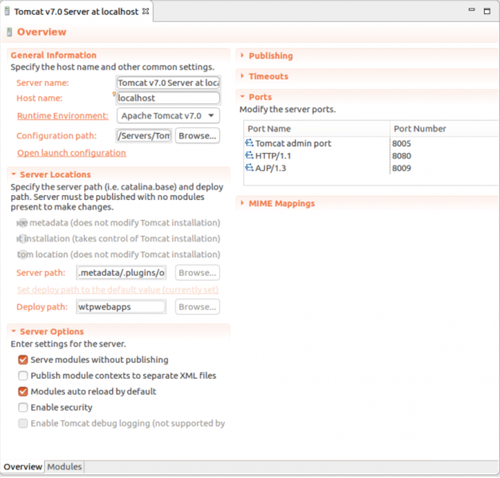 After changing all, save your server configuration (press Ctrl+S).

When creating a new server, by default is is named "Tomcat v7.0 Server at localhost". This name can be changed to something custom, both at creation time or later by editing it in server window.

In this case, it is necessary to bind the Server Library with the actual server. To do so:

The next step is to set the standard preferences used in the development of Openbravo.

Once finished, select all the projects, refresh them, and rebuild them (right click on one or more projects and you will find the Refresh and the Rebuild options). You should get warnings, but not errors.

Now start the Tomcat server by right-clicking on the server instance in the Servers view and choosing Start option in the popup menu. Wait until the server is started (can take up to 2 minutes) and visit http://localhost:8080/openbravo/ in your internet browser. If everything was configured and installed properly you will get to the Openbravo ERP log in page. Use these credentials to log in:

both are case sensitive.

That's it, the installation is over and you're ready to start developing.

Starting from PR17Q1, the minimum System Requirements for Openbravo were increased to Java 7 and Tomcat 7. For worskpaces created in older versions, some upgrade might be required.

Once updated to a newer version on a recent stack, it will be automatically allowed to write Java 7 compliant code.

If Tomcat 6 was used, the server needs to be removed and a new Tomcat >=7 needs to be created, after it, a rebuild will be required, see how here.

Starting from PR18Q4, the minimum JDK required for Openbravo was increased to Java 8. For worskpaces created in older versions, some upgrade might be required.

Once updated to a newer version on a recent stack, it will be automatically allowed to write Java 8 compliant code.